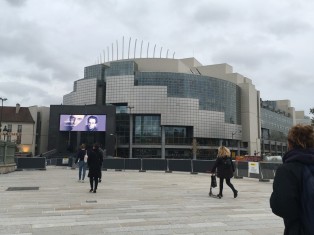 It was not Wagner, but it was Robert Wilson.

While in France recently, we took our two college age grandchildren to see Madama Butterfly at the Opéra Bastille in Paris. This was my fourth visit to Opéra National de Paris– we have seen Louise by Charpentier; the infamous 2008 Christoph Warlikowski Parsifal (the one with sinks in every scene, 2001 A Space Odyssey background characters and a Nazi war film); and the Peter Sellars video Tristan with Ben Heppner and Waltraud Meier in 2005. We decided to do this after attending Wilson’s discussion at the Wagner Society in October. After all, this Butterfly was the start of his opera direction trajectory, and he had just come from Paris to set up this revival before the COC’s Turandot launch.

But first of all, the house. The Opéra Bastille is my favourite, simply because of the stadium seating in the two balconies. It is the only house I know where heads in front aren’t a problem, except in the orchestra. The stage set up photos here were from our mid-priced seats in the 1st balcony. The view doesn’t get better than this.

Not pretty on the outside, I’ll agree with most Parisians on that point. But inside, the Opéra Bastille delivers acoustically and with great sight lines.

This was the 105th performance of this production, and the house was sold out. They love Robert Wilson in Paris, and I get why after our experience on November 2nd. He premiered this work there in 1990.

The Wilson formula was in full play here. Colour was used to match the mood of the music and to punctuate shifts in dramatic direction. Gestures were choreographed likewise. His sophisticated lighting spears and lines from Turandot weren’t used here; they are likely a newer development. For this Butterfly production, Wilson was inspired by Butoh, a Japanese form of dance characterized by slow motion, poetry and minimalism.

The set was sparse, featuring a wooden rectangle representing Cio-Cio-San’s house. The path up the hill was a wooden curve, lit with stars or dimness depending on the happy/sad story moments. A chair was used as an exclamation point prop by secondary characters like the Bonzo, Prince Yamadori and the son.

All performers were in white makeup, except for Pinkerton’s American wife, the boy and the Consul, Sharpless. Butterfly and Pinkerton were in very light makeup. The intensity of white was in direct proportion to old, traditional Japan and the characters representing those values (heavy makeup), vs. the hope for the future people (light or no white makeup).

Costumes were an integral part of the staging. Pinkerton wore a long white caftan rather than a naval uniform in Act I. Likewise, a gown for Butterfly. All others, including the chorus, family members and key plot characters were in stylish, somewhat over-the-top takes on Butoh theatre costuming. Visually stunning. In Act II and III, characters were now in darker colours, in line with the story’s path.

The cast was excellent. Ana Maria Martinez has made Butterfly one of her signature roles, apparently. She was nuanced and mindfully intense in her interpretation, sometimes meaning the orchestra won the moment, over the power of her voice. But I fell for her situation, and was very taken with and moved by her performance. Her Un bel di vedremo was the most wrenching I’ve ever heard.

Pinkerton was Giorgio Berrugi. It was announced he was ill, but he had decided to sing. He did fine; I noted that he couldn’t resist dropping the Wilson stance and hand gestures at the end of Addio, fiorito asil in Act III and do the Italian tenor centre stage high five flourish at the end thing. He did get some boos at curtain.

I thought Sharpless, Laurent Naouri, was a great foil for Martinez’ tragic situation and singing portrayal. Strong-voiced and with a with a commanding presence, his was the next most significant character in this production. Again, Robert Wilson’s use of motionless presence on stage of key characters worked well with the Consul.

Two Canadians – Marie-Nicole Lemieux as Suzuki and Robert Pomakov as the Bonzo both shone in their smaller but key roles. On the whole, this Madama Butterfly was a lot more subtle than Wilson’s Turandot, and a lot more moving – the music certainly helps in that regard. It is one of Puccini’s most beautiful scores. The young Italian conductor Giacomo Sagripanti led this wonderful orchestra through a nuanced and warm reading of the score, rather than the usual rousing version. It set the scene for the subtle visual magic on the stage. In Act II, for the humming chorus, Butterfly and Suzuki were at centre stage, motionless as in a trance. The boy (a very accomplished child dancer) did a long and beautiful ballet tour around them, exquisitely choreographed. The 2725 capacity audience house was at a standstill by the end; you could have heard a pin drop. Extraordinary. It was the highlight of the night, in my view. It was quite the experience; our two grandchildren were absorbed throughout. This was their second time at an opera. Given their first was a Tannhauser in Strasbourg with an alien flying saucer as the staging centrepiece, I think we did well to correct any misinterpretations about the grand opera experience (and their grandparents’ taste in entertainment!) 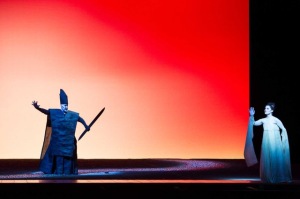